Are you also afraid that your customers are not yet wise enough in the digital world? “Our older customers don’t understand that”, is a frequently heard argument. Yet a change is underway. The elderly are much wiser than we think.

The image prevails of the elderly fellow man who does not understand those mobile telephones and digital applications. ‘Move the mouse to the top right corner’, was taken a little too literally years ago in a well-known advertisement. It is also not easy to move with the times. Although… is that so?

Do you remember this one?

Elderly people increasingly have a smartphone with internet access. 85.7% of people between the ages of 65 and 75 own a smartphone (CBS, 2020). The percentage of smartphone owners also increased from 11.6% to 51.9% among elderly people aged 75 or older.

The corona crisis has also had a positive effect on the digitization of the elderly. Due to the corona crisis, older people have started using the internet much more. A third of the elderly who were not on the internet before the virus outbreak have started using it after all. This is apparent from a poll by the elderly association ANBO, RTL Nieuwswrites. Video calling is the most natural thing in the world and more and more people over 60 are also on social media.

The elderly have also become more familiar with scanning QR codes in corona time. The QR code has been on the rise in times of crisis. Scanning a QR code is easy with the camera function of almost any smartphone or via one of the many QR scanner apps.

For example, we see that QR codes are offered much more often in restaurants and on terraces for viewing menus or even making orders. Also with the digital queue system Whoonext a QR code has to be scanned to be in the virtual queue. 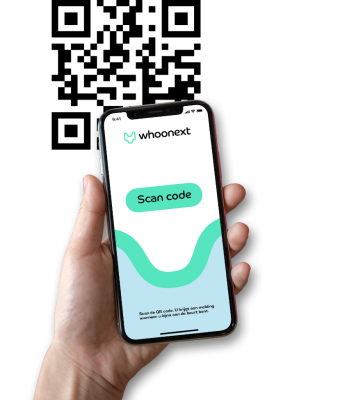 According to the elderly PlusOnline, this image fits into a broader trend. Service stations without staff are the norm and self-scan cash registers in supermarkets have also gained in popularity. Ordering via the ‘pole’ at fast food restaurants is also already established.

“Whoonext also takes into account the elderly who are not yet very digitally skilled.”

However, there are still elderly people who do not want or are unable to keep up with the times. Smart entrepreneurs are responding to this. For example, the digital tracking number tool Whoonext has built in the option to manually add the elderly.

Founder Dewi Knaapen of Whoonext: “We understand that entrepreneurs do not want to leave their older customer out in the cold. They deserve the same service. That is why we made it possible to easily add these few customers manually in the system. That way they can still stand in line with them.”

It is expected that digitization will continue and that fewer and fewer people will not have a smartphone.